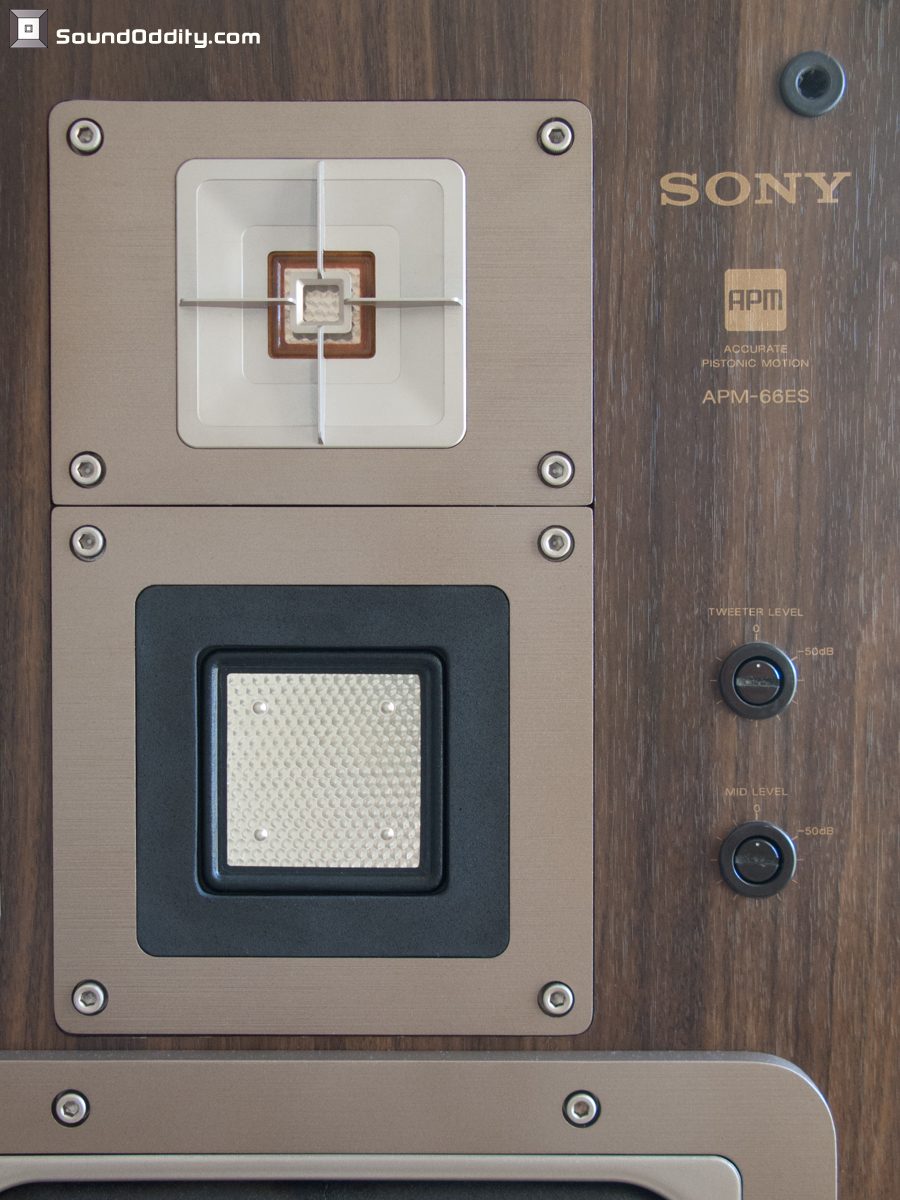 The Sony APM-66ES are the last high-end APM speakers to have been made, the last series with all the latest technologies. You will find the ES version, the ESMKII (with black speakers and a closed, acoustic suspension box) and finally the ESG version (with regular conical midranges and dome tweeters but keeping the APM technologie for the woofers).

For those who are not aware of this, APM stands for “Accurate Pistonic Motion”. It is linked to the way of driving a flat square diaphragm. Sony engineers wanted to think out of the box and to create something different and performing, using the new available technologies of the seventies. They found out that a flat and rigid square diaphragm drove in at least 4 points was the best design to avoid split vibration and have the breakup frequency much higher with a distortion level much lower on the whole spectrum.

The 66ES could be compared to the Sony APM-55W in terms of dimensions but in fact they share not much thing with them except for the same woofer’s diaphragm’s surface area.

When comparing the woofers magnets, one could think the 66 are down scaled 55 but they aren’t at all. The 66 have in fact a much more evolved driver’s design, with T shape pole pieces, a strontium magnet material, flat wire OFC copper voice coil, a thinner magnetic gap and an aramid spider. For the same measured MMS of about 65 grams, the measured BL of the 66 is 1.5 points higher with a value of 14.5 against 13 for the 55. It doesn’t mean ether that the 55’s woofers are less good, it’s just that the 66’s woofers are more optimized for less weight.

The driving system of the 66’s woofers is the last APM evolution using 8 points driving instead of 4. It allows to get rid of the 9th order resonance mode of the 4 points driving system originally designed for the APM-8. Consequently, the frequency response of this woofer is flat until 4KHz! Which is kind of unbelievable for a diaphragm equivalent in area to a 25cm diameter cone. The result is an incredibly clear and fast bass response, so detailed and powerful.

The woofer was originally made with foam surrounds up to the serial number 302,600 for the EU and up to 800,440 for the US. But in the midst of production Sony started to encounter problems with the earlier APM line with the foam surrounds disintegration problems. Lacking of repair facilities and customer supports around the world, they decided to change the foam surrounds for synthetic rubber surrounds for export models only, thus prioritizing reliability over sound quality. As far as I know, no change were made in the bass reflex port tuning of the boxes while the rubber surrounds were in fact harder with a higher Fs. It is only after a while that a specific model were made for the rubber surrounds woofers which was the APM-66ESMKII with a closed box.

The original foam surrounds woofers had a very low Fs of 19Hz because of the use of a very very soft foam. It will be hard to find such a soft foam surrounds nowadays and one has to be very careful when deciding to repair these speakers with the first found replacement surrounds if one wants to have the original sound quality of the woofers.

The midrange is the centerpiece of the system. It is a real 4 points driving APM speaker. 4 aluminum cylinders are actually going though the diaphragm and are connecting the front skin to the voice coil, the same as on the Sony APM-6 tweeters. The aluminium skins are not just made with regular aluminium, they are treated to be micro porous with a lot of micro vacuum volumes inside. This allows to have much higher internal losses, almost identical to the losses of the paper while keeping the advantage of the speed of the sound in aluminium which is 2 times higher that the one of the paper. Combined with the APM driving system and the incredible rigidity of the APM diaphragm, it allows having ultra detailed yet ultra natural and non-agressive mids with an amazingly low distortion level. The driver uses a voice coil made with aluminium copper plated flat wire, some T shape pole pieces and a copper ring for the reduction of the eddy currents. So beautiful construction.

In terms of performances, it can be compared to the amazing Yamaha beryllium midranges of the Yamaha NS-1000 while being much cheaper to produce. It’s hard for me to tell which midrange of the Yamaha or the Sony would be the best…

The aluminum skins of the tweeter’s diaphragm are covered with amorphic diamond allowing to reach the speed of sound of the diamond, which is higher than the speed of sound inside beryllium. Flat wire voice coil along with ferofluid. The result is very low distortion level with amazing transient characteristics for some beautiful natural highs.

These speakers are truly high-end items, one has to spend more than 8000 euro to find such qualities in current new productions. And very important is that one as to plug them to a very high end system to be able to really ear what they can deliver. Basses are unbelievable of qualities, 3D stereo is impressive as well as the transparency and dynamic all over the spectrum.

The only downside would be the overall quality of the box and finish which really is not representative of the sound quality.

My woofers are restored with some 45° oriented then pressed fabric surrounds. This surrounds allows an Fs of 22Hz which is only 3Hz more than the original foam surrounds and more than 20Hz less than the later Sony rubber surrounds. Fabric surrounds gives a much better centering than foam surrounds: very good anti-roll off and radial movement effects. Furthermore, the fabric’s weaving greatly improves the damping: the QMS is at around 4 against 15 for the foam surrounds. And very important is that these surrounds will last forever! You won’t find such surrounds industrially made only because they would just be too expensive. The 45° angle orientation is kind of the cherry over the cake and allows a better homogeneity of the force and better moves. One could think of it as they were made as some no cost spared items. They are so expensive and time consuming to manufacture, but to my opinion they are truly the best.  A custom machined aluminum mold were made in order to manufacture these surrounds.

I also changed the foams around the midrange surround for softer ones. The original foams have the tendency to become hard and to disintegrate.

All the original oxidized chassis have been seriously brushed and repainted. No risk of oxidation anymore!

Filters are entirely new except for the originally good quality woofer’s coil.

They are built on a wood/bitumen sandwich with some 2mm thick soft foam on the top. This allows amazing damping of the vibration which are very much undesirable here. Capacitors are Mundorf MCAP EVO, EVO OIL and SUPREME. Coils are high quality air core Mucndorf and the one that is in series with the midrange is a ribbon wire air core one! Resistors are Mundorf MOX. Cable are Sommercable Meridian. About 350 euro of parts here!

The potentiometers, fashion from the seventies have been bypassed so that they won’t make any issue anymore. No place for doubt here! We don’t want bad contacts there!

I also made copies from the original WS-660 feet. They put the middle between the tweeter and midrange at 81cm from the floor, which is ideal for our European sofas and living rooms. They are made of 28mm MDF for the base, and of 22 and 18mm for the other parts. They are filled with sand. Finish is mat black paint.